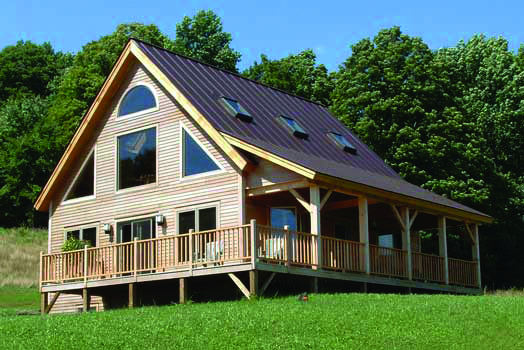 Andy Harper, of Winterwood Timber Frames in East Montpelier, has always been committed to buying logs as locally as possible for his custom-built timber frame houses. But when he was awarded a WLEI grant for $75,000 in 2015, he was able to power up and outfit a new showroom and workshop on Route 2 that helped him invest even more in the region. Harper used the grant to install three-phase power suitable for running the heavy machinery needed to expand his mill-working business, and purchased two new kilns to dry his locally harvested timber on-site; when he’s not using them, local woodworkers also enjoy access to the kilns for their own projects. A new wood-burning external boiler heats the facility, using wood scraps gleaned from workshop waste. The grant also funded two new custom-made signs that help bring passersby into the new showroom, and resulting in at least two new building projects.

Thanks to investments made possible by the Working Lands grant,Harper more than doubled his gross sales in 2015, and is on track for more than $1 million combined profit for 2016. That’s helped him maintain additional year-round employees, and to be the local sawmill’s biggest customer in 2015.

“Winning a WLEI grant felt like the vote of confidence that I needed to move my business forward,” Harper says. “And it felt like we were sharing the risk to some degree, allowing me to make smarter decisions to benefit the business and continue to invest locally.”