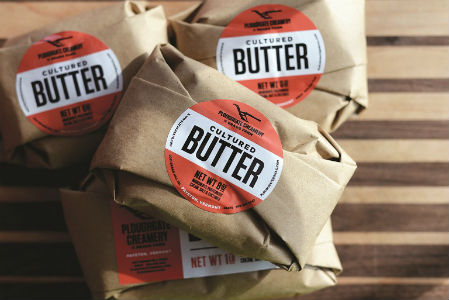 Marisa Mauro, of Ploughgate Creamery in Fayston, was spending a lot of time shuffling packages of her homemade cultured butter between four different fridges during the first two years of being in business. “It was like playing Tetris with butter, which limited my productivity,” Mauro says. So when she received a $20,000 Working Lands grant in 2015 to help her renovate her 50-acre farm, she installed the walk-in cooler first. Within a year, she increased sales by 30 percent. As a solo entrepreneur, Mauro also benefited from renting the cooler and facilities to the Berlin-based Roger Farmstead to aid in growing its yogurt-making start-up business. And since Mauro used the remainder of the grant to renovate the tie-stall barn in preparation for her own future herd of animals, she was also able to lease the land and barn to the Waitsfield-based Von Trapp Farmstead for its award-winning artisanal cheese business.

“The walk-in cooler purchased with the WLEB grant money was an amazing opportunity to increase my sales and get a chance to collaborate with other farmers,” Mauro says. “That’s really important, because I’m a one-woman show. Having the facilities to rent out means I have a sounding board of other farmers whose opinions I respect and who have wisdom to add to my business. It’s definitely improved my quality of life, while helping these other farming businesses thrive as well.”